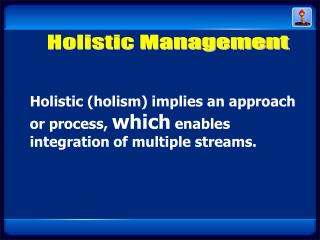 Holistic Health Management - May almighty illuminate our intellect andiinspire us towards the righteous path. holistic

Anger Management Sessions & Therapy - Philosophy Holistic - Anger is a basic and normal emotion, but one that can

Holistic Management An Alternative Decision-Making Process - . a process that simultaneously considers the ecological,

Holistic Medicine - . its foundations and how to integrate it into our every days lives. types of h olistic m edicine.

HOLISTIC RUBRIC - . on a poem about nature. goal apply the guidelines in composing a poem as well as express their

Holistic Healing - Https://www.healthyhildegard.com/holistic-healing/ holistic healing is the root of all medicine.

Holistic Medicine - Holistic medicine, also known as functional medicine or integrative medicine, is about the