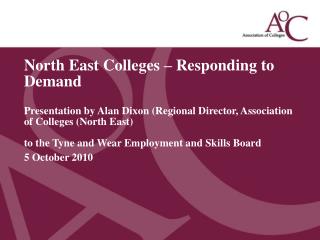 North East Colleges – Responding to Demand Presentation by Alan Dixon (Regional Director, Association of Colleges (North East) to the Tyne and Wear Employment and Skills Board 5 October 2010. Colleges as Employers. 2.2a Aggregate Demand - . aggregate demand (ad) is comprised of all the spending that comes to a domestic market.

“Supply, Demand, and Market Equilibrium” - . introduction to demand. in the united states, the forces of supply and