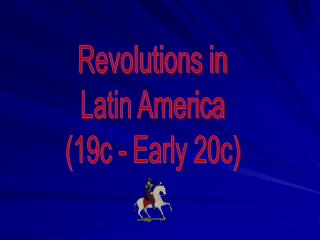 Chp . 2- Population - . ki 3- why is population increasing at different rates in different countries?. the demographic

Literary Movements in American Literature - . or, how we ended up with all these pieces of literature we have to study in

Why is Population Increasing at Different Rates in Different Countries? - . key issue #3. demographic

19 th Century Slavery in the South - . evolution of a tragic institution. slave trade: abolished in 1808. conditions.

Early Latin America - . before 1492. most areas were inhabited by non-sedentary and/or semi-sedentary people how many

Emergence of the Americas in Global Affairs 1880 - 1929 - . civil war to turn of the century. from colony to superpower

Chapter 8: Life at the Turn of the 20th Century - . answer the objective questions for each section as you read – they