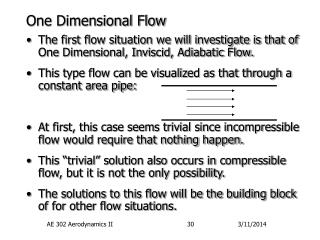 One Dimensional Flow . The first flow situation we will investigate is that of One Dimensional, Inviscid, Adiabatic Flow. This type flow can be visualized as that through a constant area pipe: At first, this case seems trivial since incompressible flow would require that nothing happen. Chapter 10 The One-Dimensional Array - . section 1 - what is a one-dimensional array? section 2 - declaring and

Data Flow Diagrams for GIS - Data flow diagrams. a graphical means of presenting or describing a process (or series of

How to improve your cash flow and profitability - . - by working smarter, not harder . who feels like this?. the scope of

Network Flow - . network flow. use a graph to model material that flows through conduits. each edge represents one