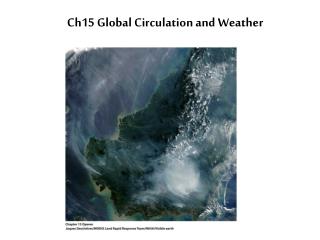 Ch15 Global Circulation and Weather. Weather patterns are caused by differential heating of the Earth’s surface, both on a local and a global scale. Atmospheric Pressure .

Atmospheric Circulation and Weather - . composition of the atmosphere. the lower atmosphere is a nearly homogeneous

Global Circulation - . by: henry and jawad per.2 april 24, 2008. what is global circulation?. ocean water that circulates

Ch15 Thermodynamics - . first law of thermodynamics the internal energy of a closed system will be equal to the energy

Weather and Global Warming. - Weather and global warming. madi buchanan . what is weather?. the state of the atmosphere

Ch15. Thermodynamics - . thermodynamics is the branch of physics that is built upon the fundamental laws that heat and

Winds and the Global Circulation System - . objectives: describe the measurement and variation of atmospheric pressure