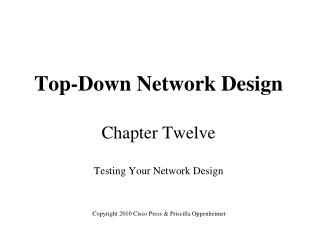 Network Design - . brandi kirkland edut 6207. devices of the network. the wi-fi wireless router is the central device the

Network Design - . a step by step process. design with change in mind. building the network is just the beginning growing

Top-Down Network Design Chapter One Analyzing Business Goals and Constraints - . objectives. how to use a systematic,