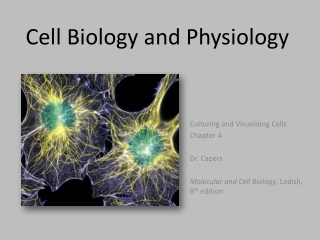 Cell Physiology - . how cells function. are my cells alive?. a. cells are the basic unit of structure and function in

Cell Physiology - . the “inner life of a cell” components and their functions cell to cell junctions - forming

Cell Biology - . what is a cell organelle ?. organelles are inside cells and they help to make the cell function. some

Cell Biology - . by c. kohn agricultural sciences. biology &amp; agriculture. in order for any agriculturalist to

Cell Biology - . essential question. cell. name those who added to the cell theory ; what did each contribute?.

Cell Biology - . what is a cell?. video http://www.youtube.com/watch?v=zufan_aetzi&amp;feature=fvw. key terms and

Bringing Light into the chaos: a general introduction to optics and light microscopy - . part 1: the root of all evil.

Essentials of light microscopy Connective tissue - . instructions. turn on the light. lower the stage all the way using