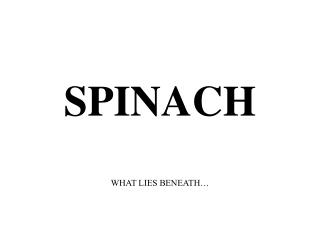 SPINACH. WHAT LIES BENEATH…. Tasks For each of the sources ask yourself three questions… What is the source telling you about spinach? Is the source reliable, legitimate and relevant? Based on the information in the source…Is spinach good for you?. WHICH 3 SOURCES ARE MOST RELIABLE? WHY?. Paper Chromatography of a Spinach Leaf Lab - . *record all of the info underined and in red in your notebook background