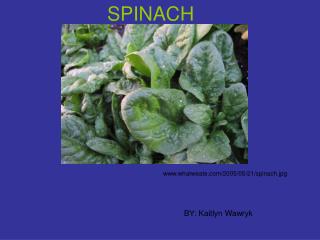 SPINACH. www.whatweate.com/2005/05/21/spinach.jpg. BY: Kaitlyn Wawryk. History Of Spinach: Originally from Persia (now Iran) and most commonly found in the Middle East. First Known as “aspankh” By the 1300’s spinach had spread to Europe and Britain where it was most popular during Lent. SPINACH - . what lies beneath…. tasks for each of the sources ask yourself three questions… what is the source

Paper Chromatography of a Spinach Leaf Lab - . *record all of the info underined and in red in your notebook background