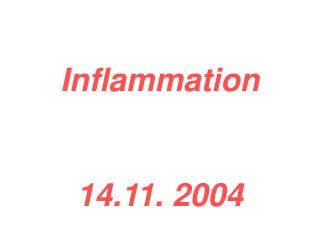 INFLAMMATION - . what is inflammation? it’s a body response against ( mild or moderate) injury , it’s a first line of

Inflammation - . dr. roopa. thought for today. “ the investment u make in yourself must receive “ top priority “.

Inflammation - . objectives/rationale inflammation is a normal response to infection or injury and is considered one of