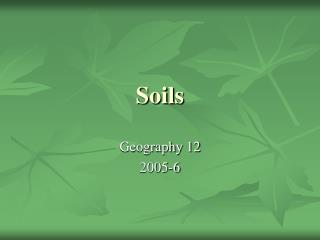 Soils. Geography 12 2005-6. Stages in soil forming processes. Soil - is the top layer of the earth’s crust that has been physically and chemically weathered into small particles and in which vegetation grows if temperature and precipitation are favourable. Soil forming processes: