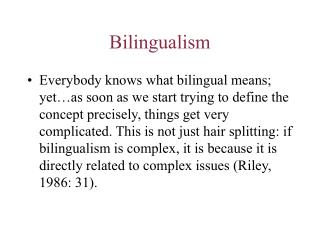 Bilingualism . Everybody knows what bilingual means; yet…as soon as we start trying to define the concept precisely, things get very complicated. This is not just hair splitting: if bilingualism is complex, it is because it is directly related to complex issues (Riley, 1986: 31). Four Questions.