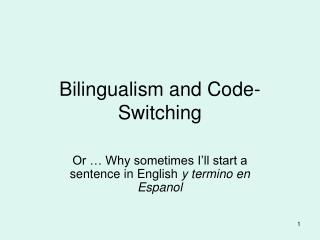 Bilingualism and Code-Switching. Or … Why sometimes I’ll start a sentence in English y termino en Espanol. The Monolingual Default. Suzanne Romaine’s book Bilingualism She notes that ‘it would certainly be odd to encounter a book with the title Monolingualism’ (1995:1) CODE SWITCHING - . is the concurrent use of more than one language, or language  variety, in conversation . -