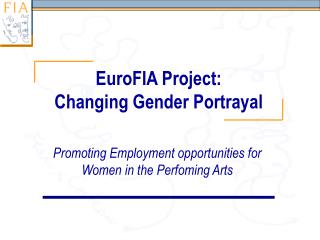 EuroFIA Project: Changing Gender Portrayal. Promoting Employment opportunities for Women in the Perfoming Arts. Background to the Project. The idea for the project arose from the work and shared concerns of the EuroFIA « Gender Equality » working group.

SOFTWARE PROJECT MANAGEMENT - . by dr.s.santhosh baboo. project:. the dictionary definition put a clear emphasis on the

Introduction to Project Management session 1 - . project management. over the course we will look at: projects and their

Mail Network Optimisation Project - . introduction of the project to the unions. july 15, 2010. explaining the project

The World of Project Management - . what is a project?. why the emphasis on project management?. many tasks do not fit

Project Management Basics - . what project professionals do. outline. what is a project??? what is project management