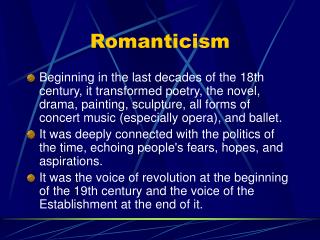 Romanticism. Beginning in the last decades of the 18th century, it transformed poetry, the novel, drama, painting, sculpture, all forms of concert music (especially opera), and ballet. It was deeply connected with the politics of the time, echoing people's fears, hopes, and aspirations.

ROMANTICISM - . the term romanticism derives from the french word romance which referred to the vernacular

ROMANTICISM? - . can you tell me what it’s all about?. define the term!. “twelve months of suffering”….

ROMANTICISM - . the beginning of a new age a radical change in european culture about the concept of human beings, world

romanticism - . literary movement in england began in 1798 with the publication of the poetry collection lyrical ballads

Romanticism - . reflections in painting. themes. fascination with the past grotesque nature supernatural nationalism.

Romanticism - . romanticism: a movement in the 18 th and 19 th centuries that was a reaction to logic and reasoning of

Romanticism - . a movement in art and literature 1800-1860. characterized by 5 points. nature emotion individual