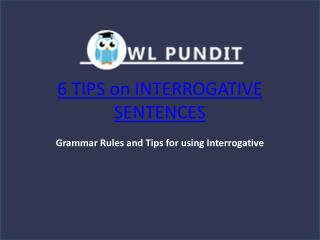 Gerunds, Participles, Infinitives - . warm up- please write the sentences out. 1. what is the correct way to punctuate

Creating Tables - . lesson 6. objectives. creating a table. a table , such as the one shown below, is an arrangement of

Vocabulary Sentences - . every single word must be spelled correctly to earn credit for the sentence. each sentence must