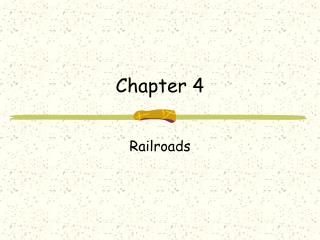 Chapter 4. Railroads. Brief History. A significant role in the economic development of US from 1850 to 1950. 20 世紀後半開始衰落 : The rise of alternate transport modes with superior services and/or cost characteristics, primarily motor carriers and pipelines A resurgence in water transportation