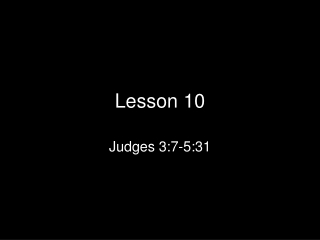 Lesson 10. Judges 3:7-5:31. The Early Judges Judges 3:7-5:31. When the children of Israel forsook the Lord and served the Baalim and Asheroth (Baal’s female counterpart) God sold them into the hands of Cushan-rishthaim from Mesopotamia 3:7 Remember what Joshua had told them?

Lesson 10 - . day 1. divide handle into syllables. han-dle what sounds do you hear in the second syllable? /del/ when the

Lesson 10 - . e-management systems. what is an entrepreneur?. entrepreneur n. a business man or woman of positive

Lesson 10 - . lecture notes. review. why did jewish identity change after emancipation? what are the three categories of

Lesson 10 - . articles. articles. an articles is a determiner which indicates the coming of a nouns. there are two kinds

LESSON 10 - . overview of previous lesson(s). over view. symbol tables are data structures that are used by compilers to

LESSON 10 - . praise and worship. 1 come, let us sing for joy to the lord; let us shout aloud to the rock of our

Lesson 10 - . balancing human rights. note to teacher. these slides provide all the information you need to deliver the

Lesson 10 - . estimation. estimation. in real life, an exact answer is not always necessary. sometimes an estimated