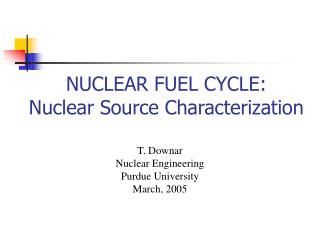 Chapter 18 - . the nucleolus: a chemist’s view. topics. nuclear stability and radioactive decay the kinetics of

Assessing Environmental Harms from the Nuclear Fuel Cycle, Coal, and Natural Gas - . presentation to the special

Internal Combustion Engine. (I C Engine) - . classification of i c engines. according to: (i) nature of thermodynamic