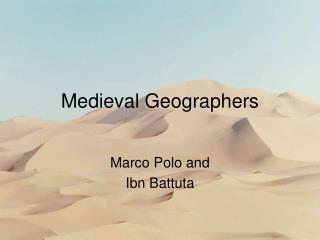 Geographers - . how does geography provide evidence of evolution?. marsupials have been found in the americas, australia,

famous geographers - Ernst ravenstein. proposed many laws of migration, some of which are relevant todaydeveloped the

Windshield Geographers - . chase jones and brandon jones are. our goal:. to enlighten our fellow students and

The Geographers Eye - . seeing the world in spatial terms. what do geographers do?. how do they answer those questions?.

Young Geographers Matter - . professor simon catling. four elements. to say something about each of the following:

Welcome back, geographers! - . lecture 1- agenda. expectations for 2009 timeline for 2009 introduction on new topic –

FAMOUS GEOGRAPHERS (INCLUDING YOU!) - . the story of odysseus traveling through the mediterranean sea after the siege of

What do geographers do? - . travel, leisure and culture environment and sustainability the business world development and