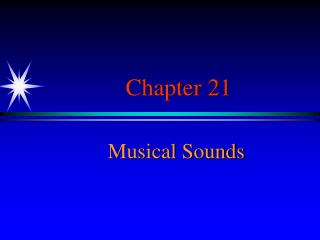 Chapter 21 Musical Sounds 1. NOISE VERSUS MUSIC Wham - Noise and Wave Forms Three characteristics of a musical tone: Pitch Loudness Quality 2. PITCH The pitch of a sound relates to its frequency. The exact relationship is complex.