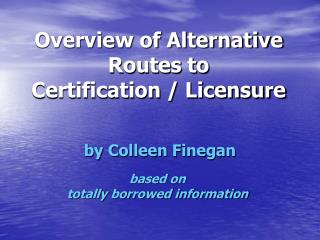 Overview of Alternative Routes to Certification / Licensure. by Colleen Finegan. based on totally borrowed information.

Annual Requisitioner Certification - . why must i be certified ?. the purpose of this certification is to train and

Alternative Healing - . evaluation of complementary and alternative therapies. presentation overview. nature, use, and

TPN: Total Parenteral Nutrition - What is tpn?. a compounded formulation which includes the necessary macronutrients and

CMRP CERTIFICATION - . overview session. a mark of distinction. cmrp status allows you to: have a premier credential

Disclaimer - . cycling is patently unsafe. i don’t recommend it. atlanta to savannah . a cyclist’s guidebook. the end