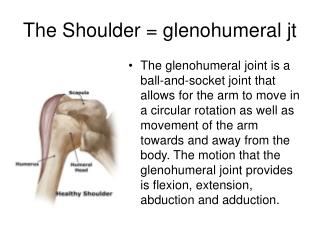 SHOULDER INSTABILITY - . shoulder instability. definition: glenohumeral instability is the inability to maintain the

Lecture 7 - . the shoulder. anatomy review the shoulder is difficult to assess because of the many structure located in a