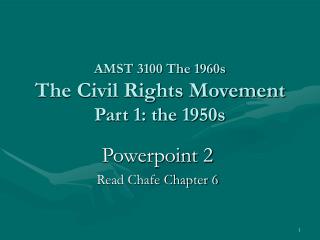 AMST 3100 The 1960s The Civil Rights Movement Part 1: the 1950s. Powerpoint 2 Read Chafe Chapter 6. The modern civil rights movement. Began in the mid-1950s Peaked in 1963 Splintered after 1965 into different camps Liberal reformers like M.L. King, Jr. who worked within the system

Contemporary Theatre and Its Diversity - . the years since the late 1960s have been noteworthy for challenging dominant

Lecture 2: A Brief History of Parapsychology - . 1. introduction and basic terminology 2. evidence from antiquity 3. the