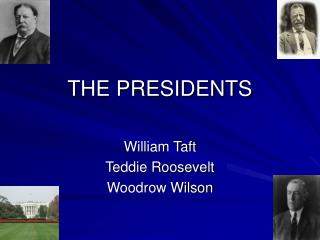 THE PRESIDENTS - . washington to monroe. presidential qualities pick the most and least important. honesty speaking

THE PRESIDENTS - . increasing the power of the office of the president. powerful and influential presidents: washington,

The Progressive Presidents - . us history: spiconardi . theodore roosevelt . despite being a conservative, teddy used the

The Progressive Presidents - . tr, taft, wilson (domestic policy) [and the election of 1912]. “speak softy and carry a

The First Presidents - . rise of the people, growth of a nation. background: united states in 1789. 9 out of 10 americans

The WORST Presidents - . oval office misfits 44 presidents – the worst 10 were?. the best presidents?. what makes a

The Presidents’ Forum - Http://presidentsforum.excelsior.edu multi-state reciprocity in postsecondary approval and

The First Presidents - . explore this powerpoint to learn more about our nation’s first three presidents. thomas