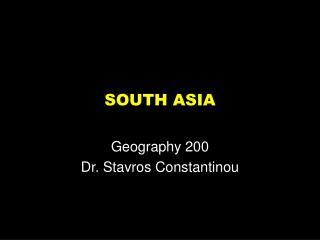 SOUTH ASIA. Geography 200 Dr. Stavros Constantinou. INDIA. The name India comes from the Sanskrit word sindhu which was used to identify the ancient civilization in the Indus Valley. This word became sinthos in Greek descriptions of the area and then sindus in Latin.

South Asia - . the physical geography. standard 8.2.1. you should be able to identify the major political features of the