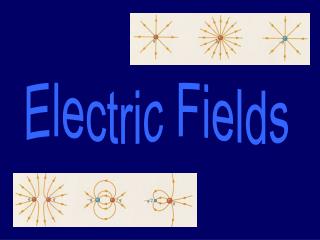 Electric Fields - . f. f. +. what is an electric field???. it is an area of influence around a charged object. positively

ELECTRIC FORCES AND ELECTRIC FIELDS - . chapter 18. 18.1 the origin of electricity. electric nature comes from the atomic

Chapter 27. The Electric Field - . electric fields are responsible for the electric currents that flow through your