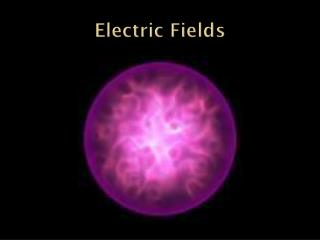 Electric Fields. Feel the force, Luke. Electricity behaves much like gravity, the same equations actually just different variables. As stated yesterday, the electric force varies inversely with the square of the distance. Electric Charges, Forces, and Fields - . the atom. the atom has positive charge in the nucleus , located in the protons.

Chapter 27. The Electric Field - . electric fields are responsible for the electric currents that flow through your