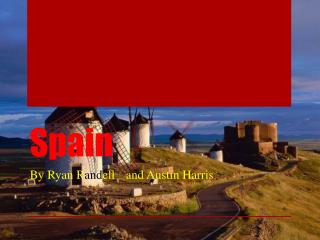 Spain. By Ryan R and ell and Austin Harris. R ed for the bullfighters' blood on the sand of the bullfighting ring or red for the blood shed by Spaniards. Spain’s Flag. Y ellow for the Spanish sun. Physical Characteristics . The Pyrenees mountains are located in the upper right corner