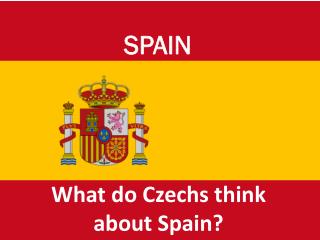 SPAIN. What do Czechs think about Spain?. ¡Buenos d í as!. We are from the Czech Republic and we‘ll try to tell you what we think about Spain. It‘s a great way how to introduce our country and people living here and their views on Spain. When you say „Spain“ we think of three things: