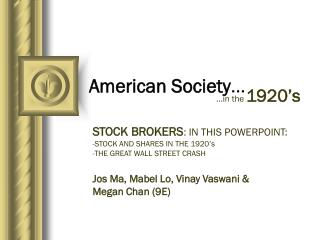 Was the Wall Street Crash a turning point? - . learning objective – to examine the short term causes of the wall street

Wall Street and the Pentagon - . the economic and business outlook for the defense market. david j. berteau july 19, 2010

HISTORIOGRAPHY OF THE WALL STREET CRASH AND THE GREAT DEPRESSION - . learning objectives. continue to develop

Wall Street Goes Down!! - . the buying of to many loans leads stock market to crash on wall street which may may lead to