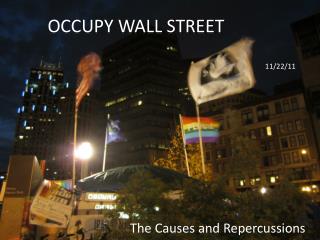 11/22/11. OCCUPY WALL STREET. The causes and repercussions. The Causes and Repercussions. Why Now?. CRONY CAPITALISM. When businesses form tight relationships with government officials to help them profit. Occupy Wall Street - . russell topp. who is protesting. based off surveys answered a majority of the protestors are white