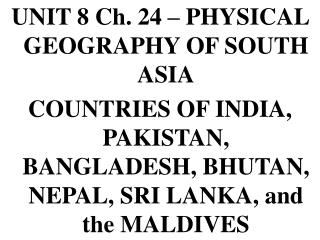 UNIT 8 Ch. 24 – PHYSICAL GEOGRAPHY OF SOUTH ASIA COUNTRIES OF INDIA, PAKISTAN, BANGLADESH, BHUTAN, NEPAL, SRI LANKA, and the MALDIVES I. Landforms and Resources A. Mountains and Plateaus 1. The Himalayas a. system of parallel mountain ranges in north part of region

The Geography Of South Asia - . mrs. kelly traina. the size of south asia. the himalayas. the natural barrier that

Human Geography of South Asia: A Region of Contrasts - . both south asia’s rich and ancient history, and its religious

Physical Map of South Asia - . what best explains how the himalaya mountains were formed and shaped in south asia?.

Physical Geography of SW Asia - . what are the major physical features of southwest asia, and where are they located?