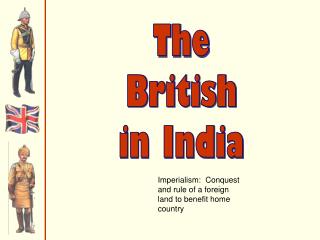 The British in India. Imperialism: Conquest and rule of a foreign land to benefit home country. The World in 1600. Why would Britain emerge as the great Imperial power, more than the Spanish, French, Holland, Portugal, Germans?. The British East India Company: 1600 - 1857. British MP Jo Cox killed - British lawmaker jo cox, 41, died after being shot and stabbed in her constituency in northern

The Great Revolt of 1857 - . module. 1 policies of east india company 2 sepoys and peasants 3 the rebellion 4 aftermath.

Who fought on the British side in the War of 1812. He was able to get lots of Native Americans to help fight the Americ

Stuti Khemani Development Research Group, The World Bank - Boiling it down to politics: evidence from federalism in india

British Columbia to 1896 - . the oregon territory. many different people had a interest in the region we know as british

come … discover india - India… what you already know – but what we shall tell you about anyways! what you probably

BRITISH COMEDY AND HUMOUR - . “ it is clear that humour is far more superior than humor.” – oscar wilde. british

The British Empire in India “The Jewel in the Crown” - . in this lesson, students will be able to define the

EAST INDIA COMPANY - . at the start of the 18th century, the east india company's presence in india was one of trade

British History - . the celts. who were the celts? from around 750 bc to 12 bc, the celts were the most powerful people