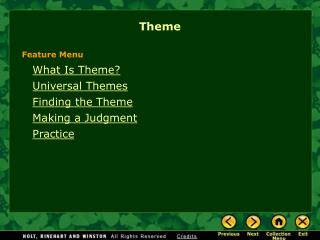 Theme. Feature Menu. What Is Theme? Universal Themes Finding the Theme Making a Judgment Practice. What Is Theme?. What makes a story linger in our hearts and minds long after we’ve read it? Often it is the idea on which the story is built—its theme. What Is Theme?.