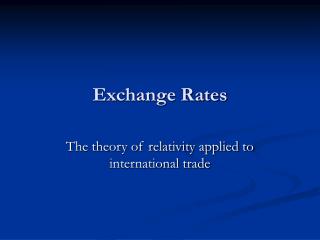 Exchange Rates. The theory of relativity applied to international trade. Exchange Rates. Before diving into something that sounds really complicated (but actually isn’t) – determining the relative value of different currencies – let’s start with something simple. THE NEWS-BASED APPROACH TO EXCHANGE RATES AND THE ECONOMETRICS OF SHORT-TERM TRADING - . massimo tivegna university of

Chemical Kinetics - . how are chemical reaction rates determined and what factors affect these rates?. objectives. to

Analyzing Utility Rates - . presented to wamcat mark pepper and kathy weinsaft . most often asked question. what are the