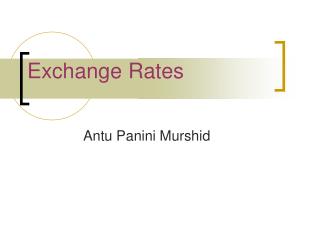 Respiration &amp; Gas Exchange - . gas exchange is the uptake of molecular oxygen (o 2 ) from the environment and the

Chapter 16 Output and the Exchange Rate in the Short Run - . supplementary notes. introduction. this chapter builds on

Forecasting Exchange Rates - . forecasting techniques: the role of the efficient market (and market based forecasting

Chemical Kinetics - . how are chemical reaction rates determined and what factors affect these rates?. objectives. to