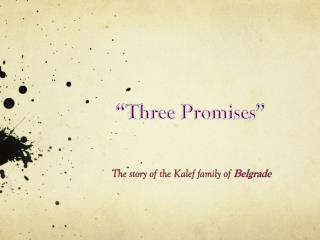 Trail of Tears - . powerpoint by: www.pbp.sevier.org/ trail - tears . ppt. quote 1. “they made us many promises, more

Promises to Keep: Technology, Law, and the Future of Entertainment William Fisher July 2, 2003 - . outline. i. potential

Auto Expo 2016 - The 2016 auto expo is just around the corner and it promises to be bigger and better this time. to be

Multiculturalism and Biculturalism in New Zealand: Promises and Regrets - History can be mobilized to provide

Chosen - . employment satisfaction survey – august 2013. what is your position at chosen? . agency. your agency - give

&lt;click to start&gt; - . filthy rags. freedom through the promises of god. old testament worship. altars could

Contracts - . what is law. generally accepted “rules of behaviour” contract law developed from the need to enforce