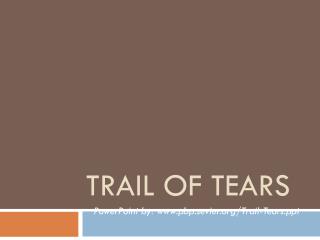 Trail of Tears. PowerPoint by: www.pbp.sevier.org/ Trail - Tears . ppt. Quote 1. “They made us many promises, more than I can remember, but they kept only one; they promised to take our land, and they did” Red Cloud, Lakota. Quote 2. “We will be known forever by the tracks we leave.” TRAIL OF TEARS - . surrounded by the whites with their arts of civilization, which by destroying the resources of the

Trail of tears - . the people traveled in concentration like camps the u.s . government passed a law in 1830 called the

Trail of Tears - . emily newcomb. the torture begins. the “indian problem” started with the discovery of the new

Trail of tears - . the us government passed a law in 1830 called the indian removal act. most cherokee had to walk the

Trail of Tears - . 8 th grade. observations. what do you see? be specific . who is in the picture? what are they doing?

The Trail of Tears - . a presentation by emily eddy and megan o'malley. indian territory before the removal. after the

The Trail of Tears - . loren gallimore. beginning of the indian removal. andrew jackson was elected in 1829 and served

The Trail of Tears - . reading a document for historical information. step 1. observation a. study the image for 2

Cherokee “Trail of Tears” - . 1. hand out art analysis worksheet from “history works” from the following web

The Trail of Tears - . westward expansion, at the expense of the innocent. unit 7, journal #2. in a t-chart in your