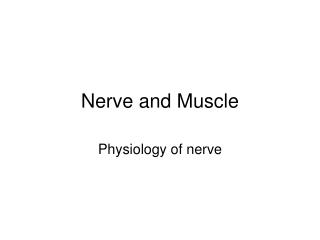 Nerve and Muscle. Physiology of nerve. The neuron. The basic structural unit of the nervous system. Structure: The soma The dendrites: antenna like processes The axon: hillock, terminal buttons. Types of nerve fibers. a- myelinated nerve fiber: NERVE MUSCLE PHYSIOLOGY - . dr farzana salman. objectives. at the end of this discussion you should be able to: 1.

Nerve-Muscle Interaction - . skeletal muscle activation is initiated through neural activation ns can be divided into

PHYSIOLOGY 1. Nerve and Muscle - . dr. abdelaziz hussein. the nervous system (ns). the ns is formed of a big no. of

The excitable tissues (Nerve+ Muscle) - . objectives at the end of this lecture the student should be able to : describe

The excitable tissues (Nerve+ Muscle) - . objectives at the end of this lecture the student should be able to :

Testo 911 :Boost muscle and nerve function - Testo 911 :-https://supplementgo.com/testo-911/ lood means that all of your

Nerve Stimulus Excites the Muscle Cell - . a muscle cell must receive a stimulus to begin the excitation-contraction

Types of Cells--Nerve, Muscle, Immune, and Skin - . nerve cells. the human body is made up of trillions of cells. cells