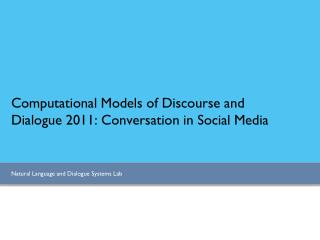 Computational Models of Discourse and Dialogue 2011: Conversation in Social Media Computational Models of Discourse and Dialogue 2011: Conversation in Social Media

Social Media? #WTF - What is social media and why is it important for marketing and advertising? in this presentation, i

Social media for engagement and improvement - . steve dale &amp; dave briggs. course objectives. by the end of the

Social Media Tools - . an overview. today. goal: understand some of the wide array of social media tools available and

The Big Deal over Social Media Marketing Marketing - . natalie guse. ultimate ways to promote yourself and your business!

A Hitchhiker’s Guide to the Mormon Cybergalaxy - . john dehlin. “podcasts, and wikis and blogs….oh my!!!”. why am