“Where were you last summer?” “In Majorca.” “Where is that?” “I don’t know, I flew there.” - PowerPoint PPT Presentation 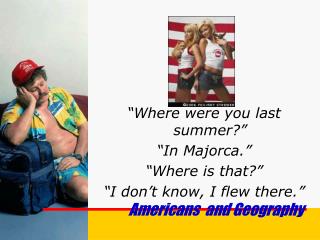 “Where were you last summer?” “In Majorca.” “Where is that?” “I don’t know, I flew there.”. Americans and Geography. Push/Pull Sunlust Wanderlust. What Makes Us Travel?. Travel Motivation Theory Wanderlust A desire to learn To seek an unknown place Also called “seeking” Sunlust

Summer solstice - Revelers welcome the longest day of the year, which heralds the start of

What are you looking forward to doing this summer? - . i'm going to barcelona and watch a bull fight this summer. . what

Summer Academy - . kindergarten – grade 2 day 1. outcomes:. as a result of the summer teaching academy, the k-2

Summer Activities and Programs - . brainstorming. what are some examples of summer opportunities available to you?.