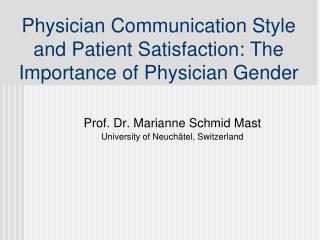 The Physician-Pharmaceutical Industry Relationship - . the cage questionnaire for drug company dependence. have you ever

AHS Physician Portal - . a step-by-step guide for users created by: nathan jass. step 1: get to the website. go to

Why Patient Satisfaction Matters Beyond Quality of Care - Patients choose where they go for care. the number one driver