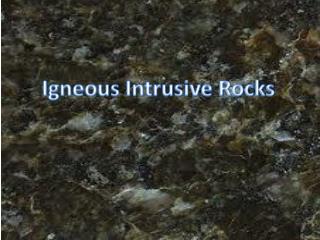 Igneous Intrusive Rocks. Objectives. The students will be able to identify different minerals, colors, sizes, and textures that appear in most intrusive igneous rocks. Igneous Rocks. The word igneous comes from the Latin word ignis , which means "fire". Igneous Rocks, Intrusive Activity, and the Origin of Igneous Rocks Chapter 3 - . the rock cycle. a rock is a naturally

Intrusive igneous activity - . as magma cools underground, it will begin to solidify within earth’s crust. once

Intrusive Igneous Activity - . plutons result from the cooling and hardening of magma within the earth exposed at surface

Igneous Rocks - . fig. 7.16. complete the following table by identifying which of the characteristics in the left-hand