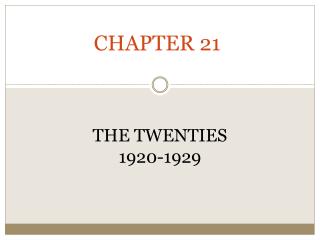 CHAPTER 21. THE TWENTIES 1920-1929. SECTION 1. A REPUBLICAN DECADE. I. Analyze the causes and effects of the red scare and the labor strikes of 1919. A. The Red Scare 1. Russian Revolution a. The “Reds” – Bolsheviks – Vladimir Lenin took control of