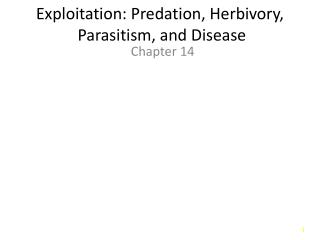 Exploitation: Predation, Herbivory, Parasitism, and Disease. Chapter 14. Introduction. _________________ : Interaction between populations that enhances fitness of one individual while reducing fitness of the exploited individual. ___________ is an insect larva that consumes the host. Warm up- copy and answer - . if there is 2500 j of energy in the 1 st trophic layer of this pyramid. how much energy

The Role of Ultraviolet Light in Defense of Brood Parasitism - . by dawna lee-olsen ecol 484. introduction. brood

Ch. 5 Review - . wyatt wall. 5.1 how do species interact?. the 5 types of interactions between species are: interspecific

Community Ecology - . species interactions. communities are interacting populations of many species. there are five types

Parasitism - . ishaba haque ib ess y1 08/02/11. what is parsitism ?. parasitism is the relationship between organisms of

Disease signatures – a simple combinatorial-type exploitation of them for our own evil purposes - . prof. nina h.