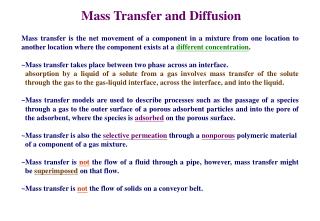 Mass Transfer and Diffusion. Mass transfer is the net movement of a component in a mixture from one location to another location where the component exists at a different concentration . ~Mass transfer takes place between two phase across an interface. Principles of Mass Transfer Molecular Diffusion in Liquids - . where solute a is diffusing and solvent b is stagnant or

Principles of Mass Transfer (CHAPTER 3) Molecular Diffusion in Liquids - . where solute a is diffusing and solvent b is

Mass Transfer 2 - . section # 10. solids- free coordinates in leaching. sometimes, we don’t use the triangle for

Mass Transfer and Its Applications - . mass transfer – transfer of material from one homogeneous phase to another.