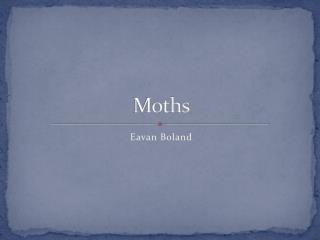 Moths. Eavan Boland. History. Moths are located all over the world However, they are found most abundantly in regions such as Ireland due to high moisture levels. Vocabulary. Fuchsia( line 14) Missing Moths and Camouflage - . camouflage. camouflage is an animal’s ability to blend into an environment it can be

All About Butterflies and Moths - . by: ciana cummings mrs.sorg 5 th grade. all about moths and