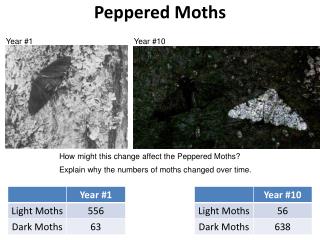 Peppered Moths. Year #1. Year #10. How might this change affect the Peppered Moths?. Explain why the numbers of moths changed over time. The Theory of Natural Selection. Over time, those not adapted most likely die. Artificial Selection. PEPPERED MOTH SIMULATION - . the evolution of the peppered moth over the last two hundred years has been studied in

Peppered Moth Story - . practical 1. learning objectives:. by the end of the lesson you should be able to: describe the

The peppered moth - . start adventure here!. you must choose the appropriate option in order to order to explore the

Event #1 : Prior to the industrial revolution, most peppered moths were grey. A few were black. - Evidence the trees that

A Peppered Moth Activity - . background information. there are two major varieties of peppered moths, a light-colored