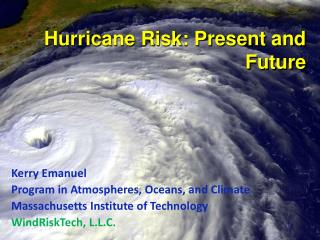 Hurricane Risk: Present and Future. Kerry Emanuel Program in Atmospheres, Oceans, and Climate Massachusetts Institute of Technology WindRiskTech, L.L.C. Limitations of a strictly statistical approach. >50% of all normalized damage caused by top 8 events , all category 3, 4 and 5